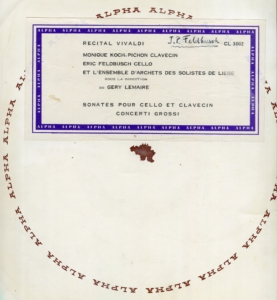 Disc ALPHA (1958-59)
Several works by VIVALDI
Including Sonata for cello and harpsichord Opus XIV
Sonata No. 2 in F major.
Sonata No. 6 in B flat major.
With Eric Feldbusch on cello and Monique Koch-Pichon on harpsichord

Comments taken from the cover.

The other works recorded on this disc were performed by the String Ensemble of the Solistes de Liège, conducted by Géry Lemaire.